Running a busy design studio means that we’re often working on several different projects at any one time and collaborating with our clients, project partners and other creative agencies on a day-to-day basis. Juggling various different graphic design concepts and website design projects is time consuming in itself and sometimes we just want to quickly share things, like a draft logo design or early website design concept.

Well you can, and what’s more, Apple have designed a solution and built it right into Mac OS X and it’s triggered by another easy keyboard shortcut. By holding down the Command (⌘) and Shift keys and pressing 4, the cursor turns into crosshairs which you can use to select whatever portion of your display you’d like to capture in a screen shot. Simply choose a start point, click and drag the desired selection and when you release the mouse button, your screen shot is saved to the Desktop.

But Apple didn’t stop there. If you press the Spacebar immediately after typing the Command-Shift-4 shortcut, Mac OS X replaces the crosshairs with a camera icon. Using the camera cursor, you can take a screen shot of the Dock, the entire menu bar, a single open menu, the desktop, or any open window, simply by clicking on it.

If you’re looking to go one-step further, then there are some great apps available that offer similar functions to Mac OS X’s Command-Shift-3 but also allow you to annotate your screen shots. Skitch is a favourite in the Quentin James Design studio as it’s an easy-to-use, free app that helps you capture, edit and markup your screen captures and images with shapes and comments. 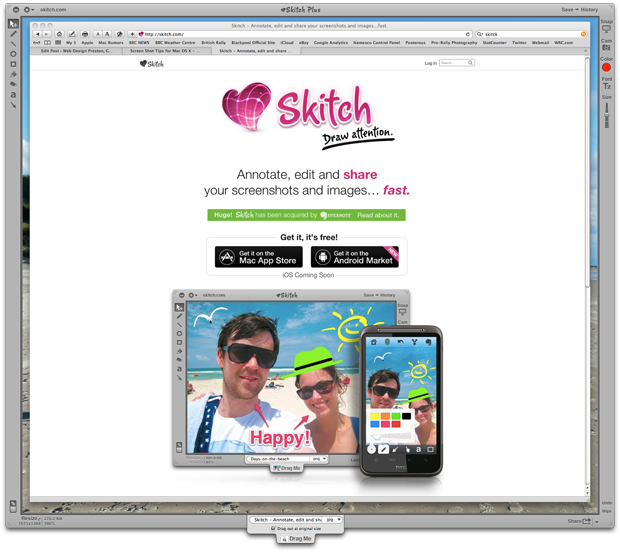 In August 2011, Skitch was acquired by Evernote, another of our favourite apps, so the future for this particular screen capture app is bright. But if you want to just capture some, or all of your screen quickly, then the Apple shortcuts are a huge time saver.