We love QR codes. We first stumbled across them around 4 years ago and ever since then, we’ve been hopeful that they would become more widespread. You may have already seen our own use of QR codes on this website, our new business cards and elsewhere amongst our marketing materials.

Now it seems, QR codes are turning up in more and more places from billboards to business cards, magazines and TV shows, even on bottles of English Cider! Considering their somewhat protracted transformation from ‘über geeky’ to more mainstream ‘tech savvy’ the question remains: Are people actually using them?

According to the latest information coming from the US, specifically from market research firm Comscore, lots of people are using them.
June 2011 saw 14 million people in the US scan a QR code, which equates to roughly 6.2 percent of all smartphone users. Comscore reckon that those 14 million users break down as follows:

The research shows that we are more likely to scan QR codes at home than we are in a high street store. QR codes in magazines and newspapers are more popular than those on websites or product packaging but it’s their recent introduction on a BBC One television programme that really caught our attention.

Just recently, whilst channel surfing one lazy Saturday morning, a programme on BBC One, namely ‘The Good Cook’, made me sit up and take note when a QR code appeared on the screen. Scanning the code with a free app, my iPhone took me to the BBC Food website where upon I found the details of the recipe just shown. 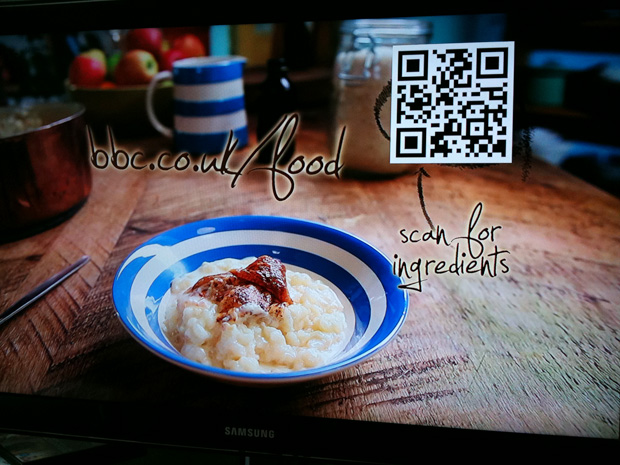 One of the many QR Codes featured on BBC One’s ‘The Good Cook’ programme.

The controller of BBC One, Danny Cohen, explained their use by saying: “I want BBC One to lead the way with interactivity and technological innovation so that we can keep engaging audiences in new ways. I hope viewers will find this experiment with QR codes to be a simple but useful tool to help them re-create the recipes they see on screen.”

Now this isn’t technologically ground breaking, or difficult to implement but it is a great example of how to implement QR codes effectively. Whilst only an ‘experiment’ it seems to be a clear indication that QR Codes are being accepted into the mainstream.
Will it last? Despite the fact that their rise in popularity isn’t exactly a boom, it’s still pretty impressive for an odd looking barcode which was once rarely seen outside of Japan until recently.

The evidence suggests that QR codes are going to be here for a while at least. We believe that the rapidly expanding market for smartphones in the UK presents a great opportunity to exploit QR codes, implementing them in both fun and practical ways. If you have one of our new business cards, or care to visit the contact page of our new website, you’ll see one fun use of a QR code and one practical use.

If you’d like to know more, then talk to us about your current or future marketing plans and we’ll explain how QR codes can be used most effectively as part of your overall strategy.